Orlando, Florida – The iconic stethoscope we’ve become accustomed to seeing draped around the necks of doctors and healthcare providers may someday be replaced by smartphones and a new portable device, called HeartBuds, that is slightly larger than a quarter.

“They not only detect sounds inside the body just as well – or better – than traditional stethoscopes, but they are more sanitary,” said David Bello, MD, department chief of cardiology at Orlando Health, and developer of HeartBuds. “And because they incorporate smartphone technology, we can now record, store and share those sounds as well. This could change the way we approach patient exams in the future.”

The stethoscope was invented in 1816 by French physician René Laěnnec, and has essentially been unchanged since. But on the eve of its 200th anniversary, the emergence of this new technology could mark the beginning of the end for this medical mainstay.

With HeartBuds, doctors use a small, portable plastic listening device shaped much like the head of a traditional stethoscope. Instead of being attached to a Y-shaped tube that feeds into the doctor’s ears, however, this device is plugged into a smartphone.

When the app is activated, sounds from the hand-held device can be played through the smartphone speaker and images appear on the screen showing rhythmic blips that correspond with each sound. Until now, only those wearing the stethoscope could hear what was taking place inside the body, but with this technology health care providers can control the volume, listen to and discuss sounds with patients in real time, and record various sounds for future reference.

“The technology is great, but we wanted to see how our device actually fared against more traditional stethoscopes,” said Julio Schwarz, a cardiologist at University of Florida Health who co-authored a recent clinical trial conducted at Orlando Health. “So we put them to the test.”

The findings of the study, comparing the effectiveness of HeartBuds to three other stethoscope models, were presented in November at The American Heart Association’s 2015 Scientific Sessions held in Orlando, Florida.

In all, doctors examined 50 patients and compared the performance of HeartBuds to two FDA-approved class I and class II stethoscopes, as well as a commonly used disposable model.

Results of the study showed that the HeartBuds smartphone-based device performed just as well as the more expensive and more commonly used class I and class II stethoscopes in detecting heart murmurs and carotid bruits, which are sounds in the neck that indicate moderate to severe blockage of the carotid artery.

“That’s very disconcerting,” said Valerie Danesh, RN, PH.D, the research and clinical grants manager at Orlando Health and study author. “Many facilities have started using disposable models after several studies, particularly overseas, showed there can be a 30 to 40 percent potential risk for transmitting harmful bacteria through stethoscopes,” she said. “These findings may cause some to reconsider that practice.”

When they’re not using disposable models, health care providers traditionally use the same, higher-quality, higher-priced stethoscope on dozens of patients every day, potentially hundreds of patients per week. Despite their best efforts to keep the head of the stethoscope clean, it’s in the stethoscope’s earpieces that bacteria often gathers and has the potential to be transmitted to patients.

“Because the HeartBuds device doesn’t have earpieces, we no longer have to worry about that,” said Arnold Einhorn, MD, cardiologist and co-medical director of Orlando Health Heart Institute and HeartBuds developer. “This device is much less expensive to produce and offers a safer alternative to both traditional and disposable models without sacrificing sound quality,” Einhorn said.

Beyond patient exams, HeartBuds is proving to have other applications as well. “I’m involved in training many medical students and residents,” said Schwarz. “Being able to listen to sounds with them, in real time, provides me with an invaluable teaching tool.”

They can also be used at home. Athletes use HeartBuds to track their condition and performance, and pregnant women have recorded sounds of their babies from inside the womb and shared them with friends and family all over the world.

“Though trained health care providers are the only ones who can use HeartBuds as a diagnostic tool, they do have many other uses,” said Bello. Patients with chronic illnesses like COPD and heart failure, for example, can use them to monitor their conditions at home. “They can take a recording of their heart and lungs at home, upload them and send them to their doctor, who can evaluate them without the patient ever leaving home if it’s not necessary,” said Bello. “Really, the possibilities are endless and the future of this technology is just now coming into view.”

Orlando Health is a $2.1 billion not-for-profit health care organization and a community-based network of physician practices, hospitals, and outpatient care centers throughout Central Florida. The organization is home to the area’s only Level One Trauma Centers for adults and pediatrics and is a statutory teaching hospital system that offers both specialty and community hospitals. Nearly 3,000 physicians have privileges at Orlando Health, which is also one of the area’s largest employers with more than 15,000 employees who serve nearly 2 million Central Florida residents and more than 4,500 international patients annually. Additionally, Orlando Health provides more than $270 million in support of community health needs. More information can be found at www.orlandohealth.com. 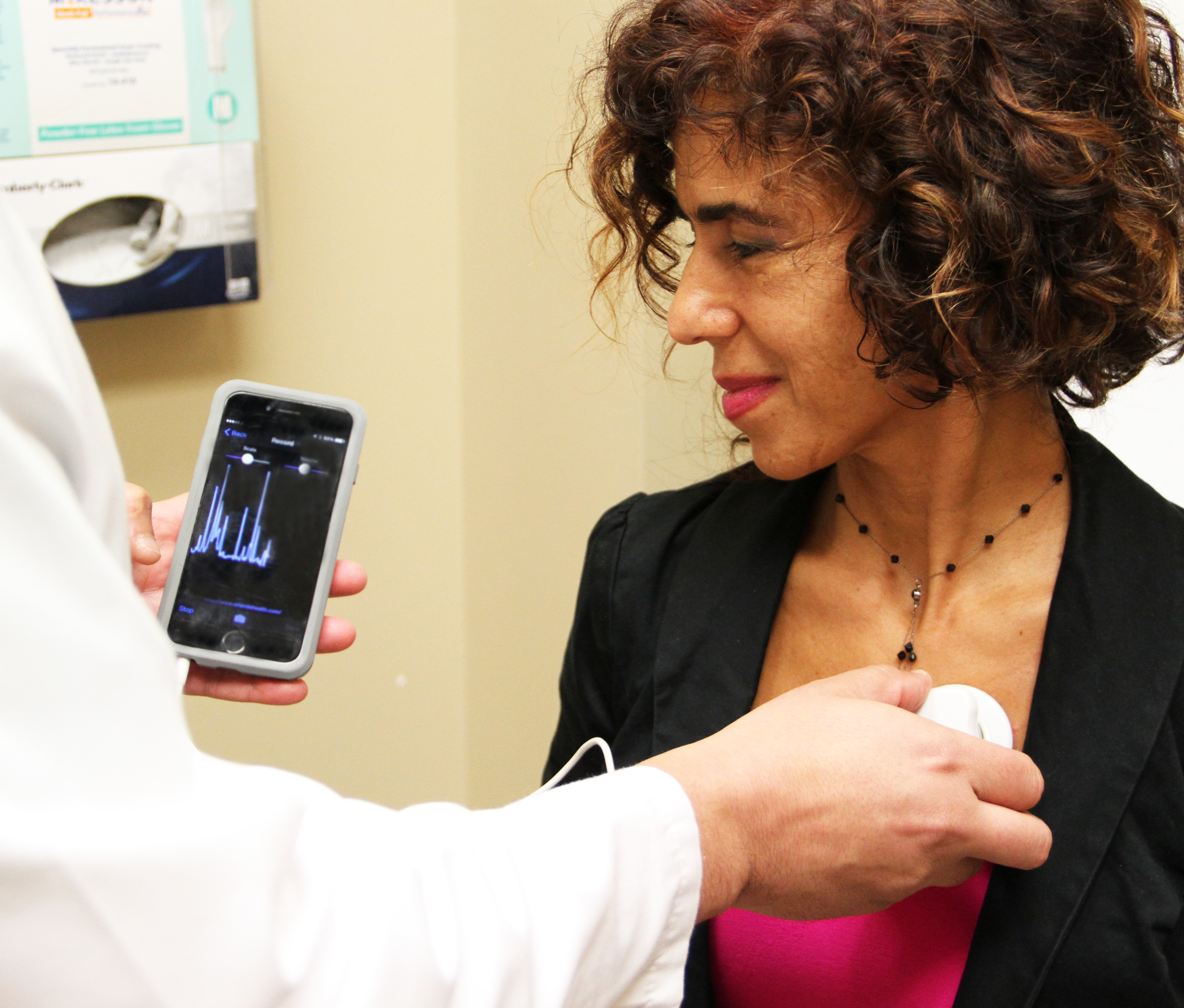 David Bello, MD, listens to the heart of a patient at Orlando Health using a new device called HeartBuds, a smartphone and an app. 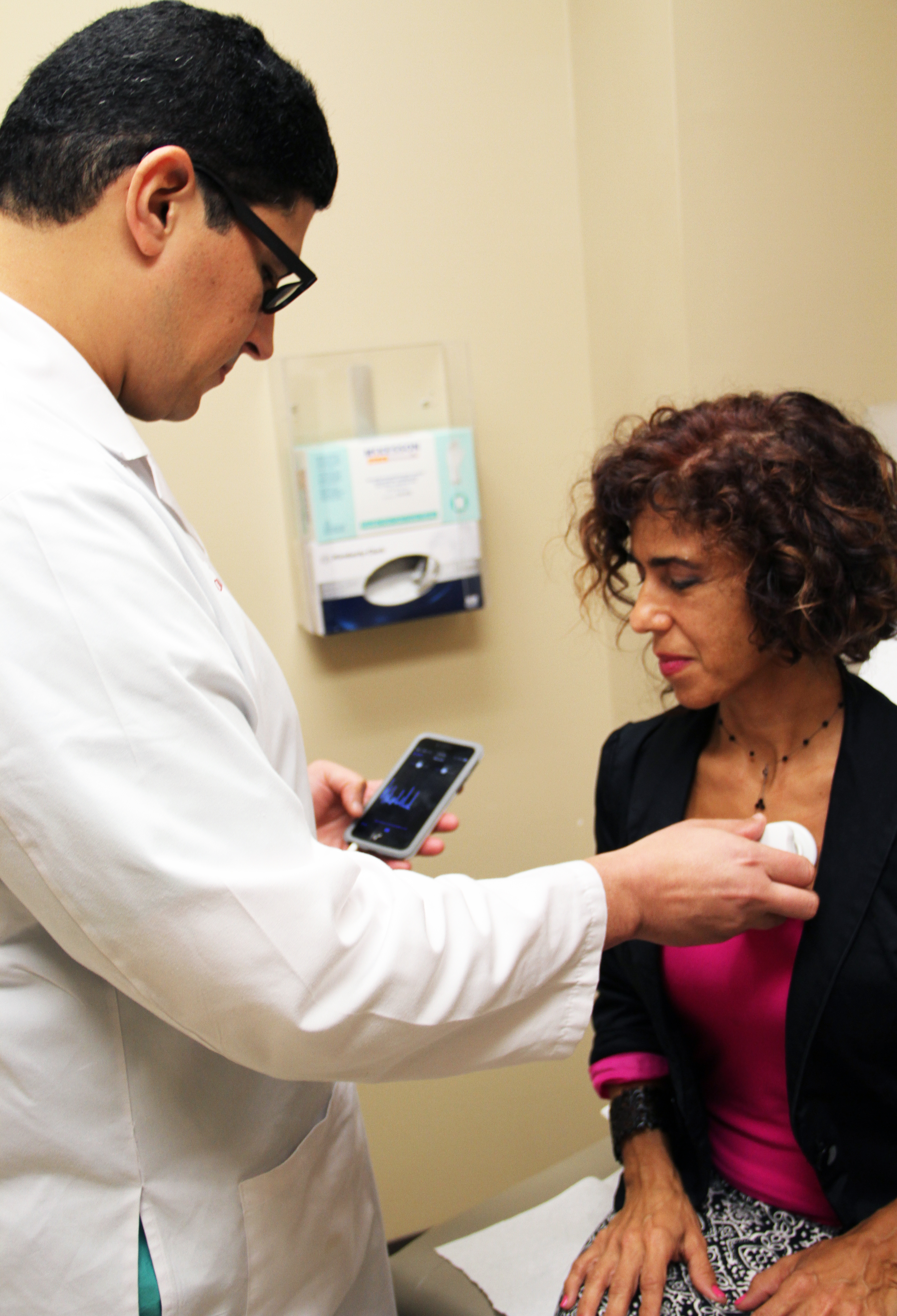 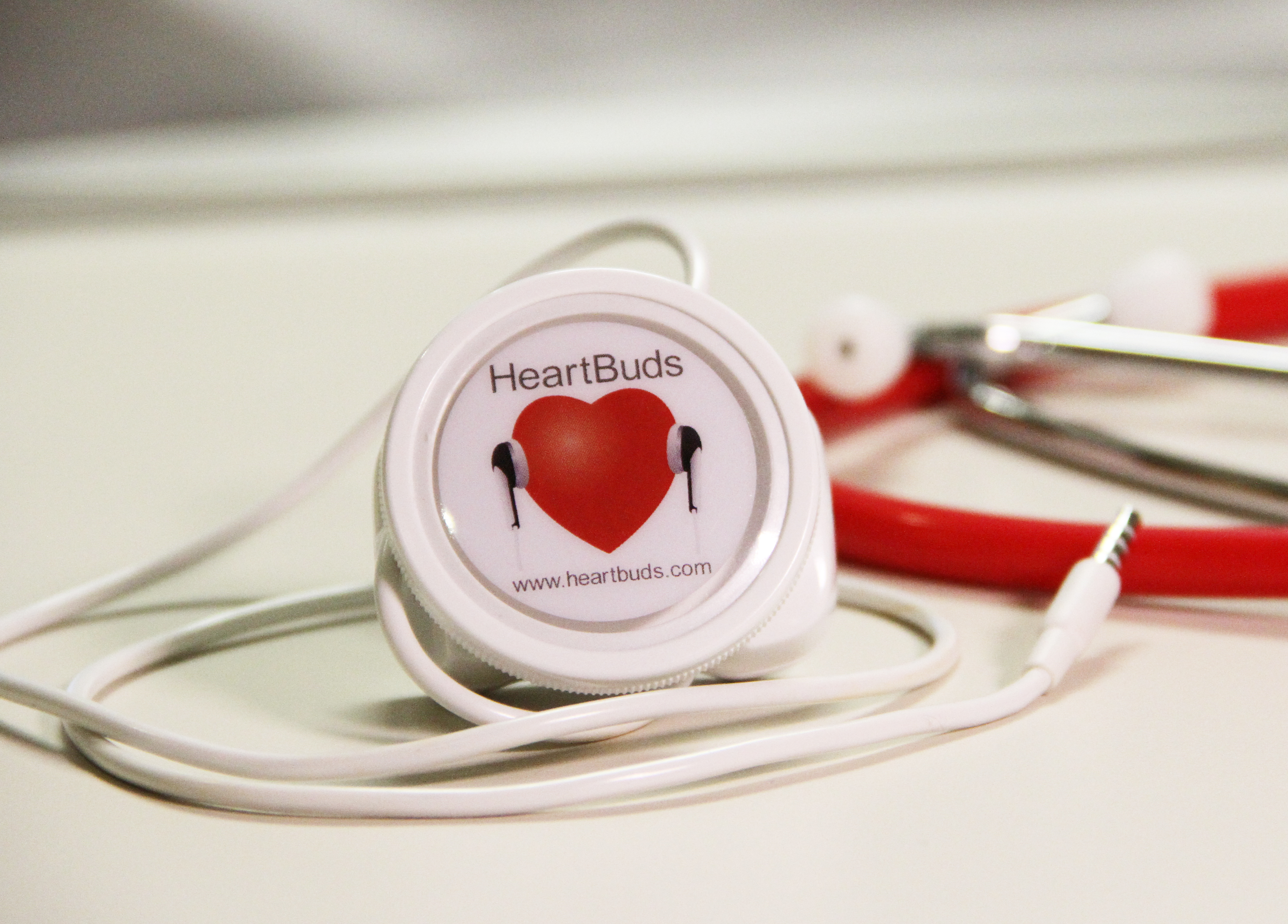 A recent study by Orlando Health found a smartphone-based device known as HeartBuds performed just as well as traditional stethoscopes and better than a disposable model in identifying heart murmurs and other vital sounds during patient exams. 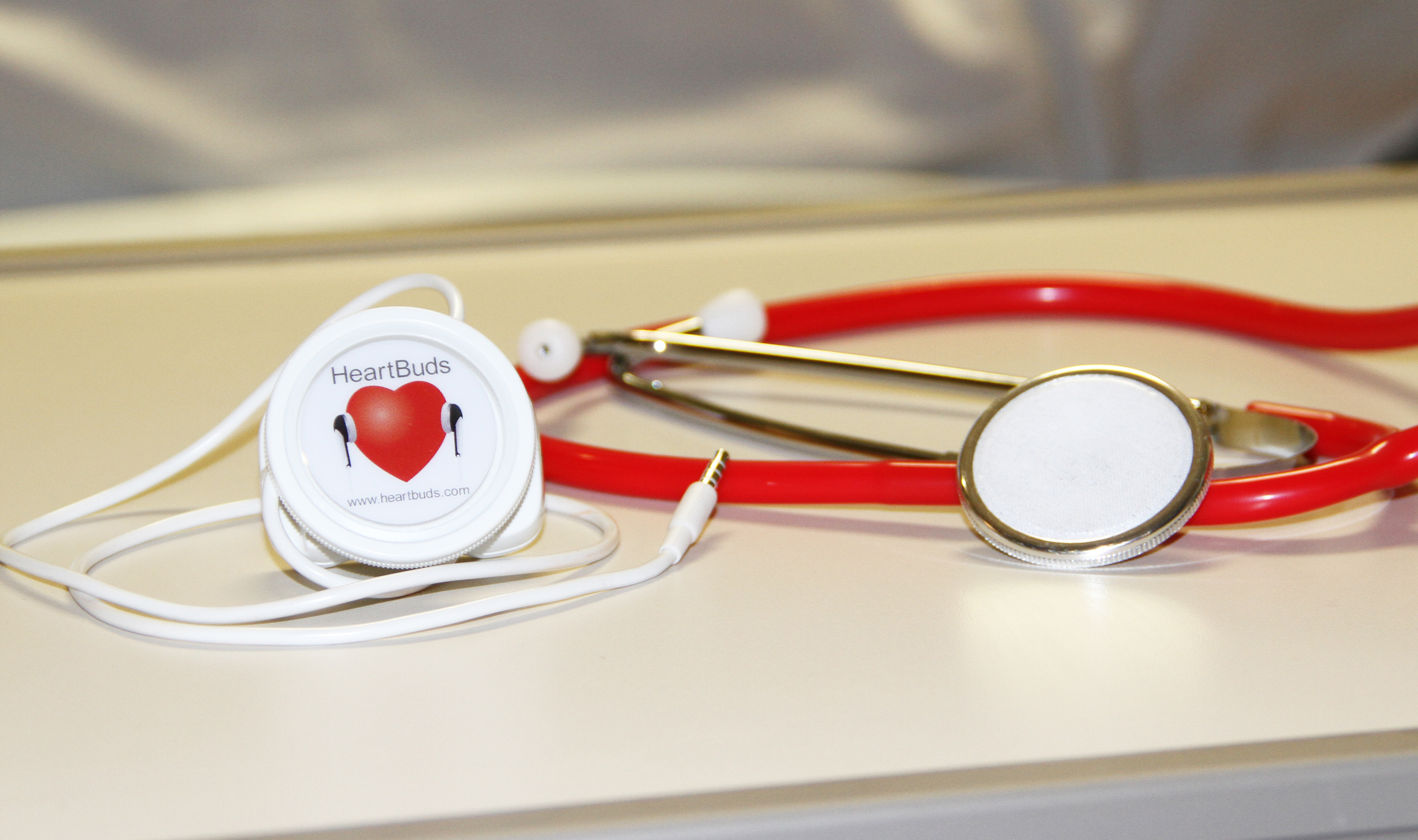 A new device that uses smartphone technology recently performed as well as traditional stethoscopes in detecting patient vital sounds in a recent study, and performed better than a commonly used disposable model of stethoscope. 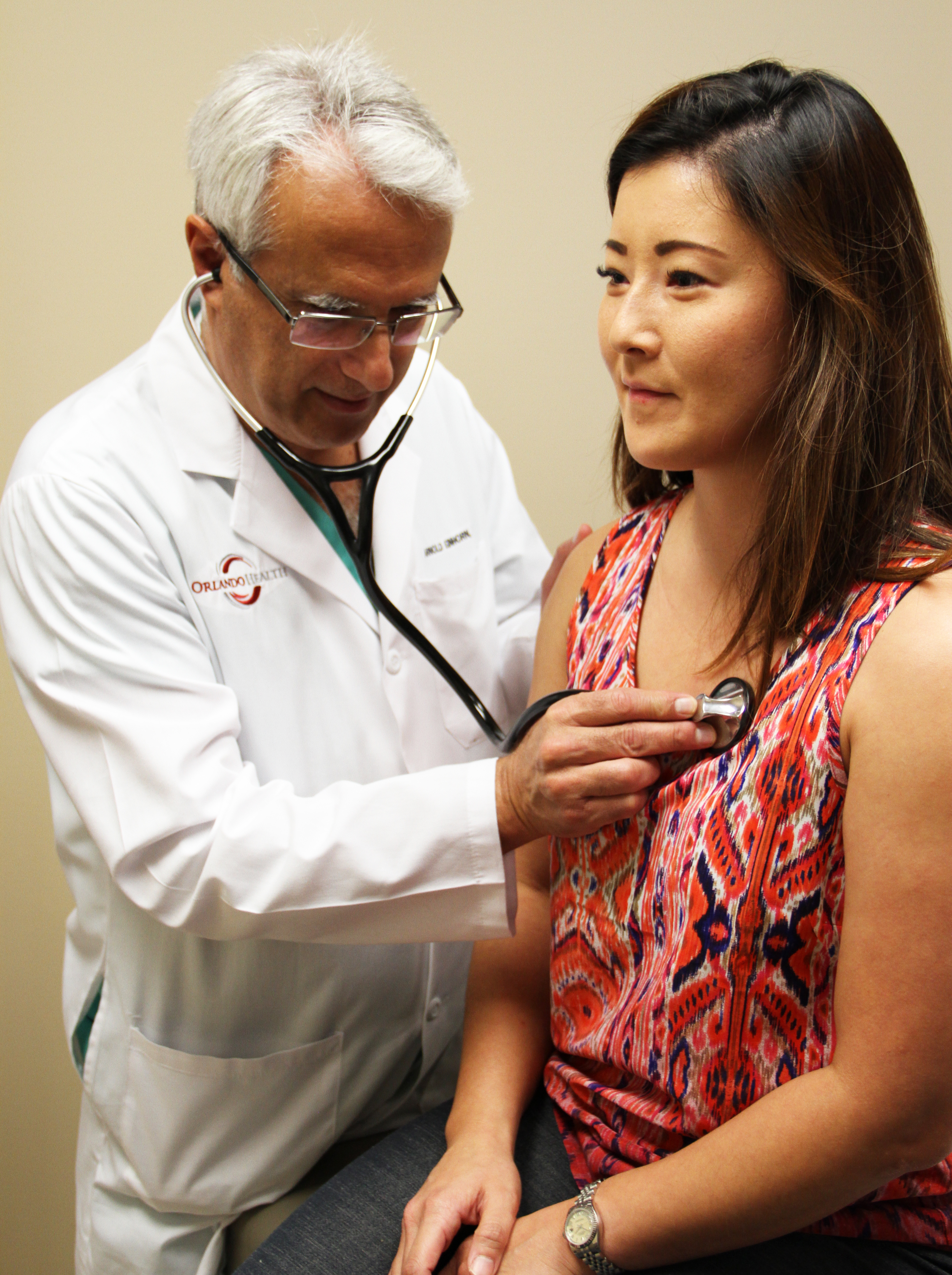 On the verge of its 200th anniversary, stethoscopes may soon be replaced by a new device that uses smartphone technology that not only listens to a patient`s vital sounds, but allows doctors to record and store them. 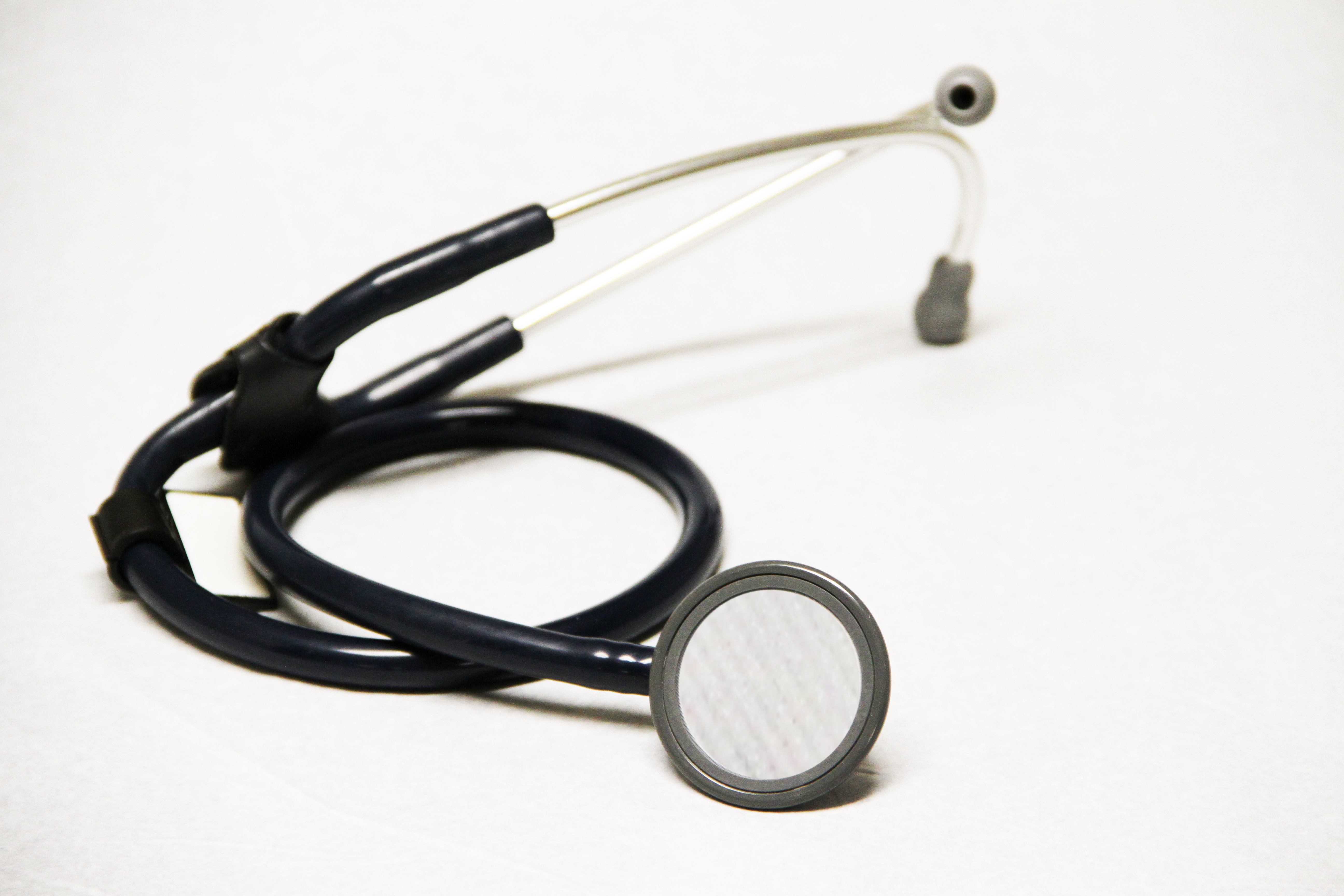 Traditional stethoscopes have been shown to retain and transfer bacteria between patients, but a new smartphone-based device called HeartBuds, eliminates that risk. 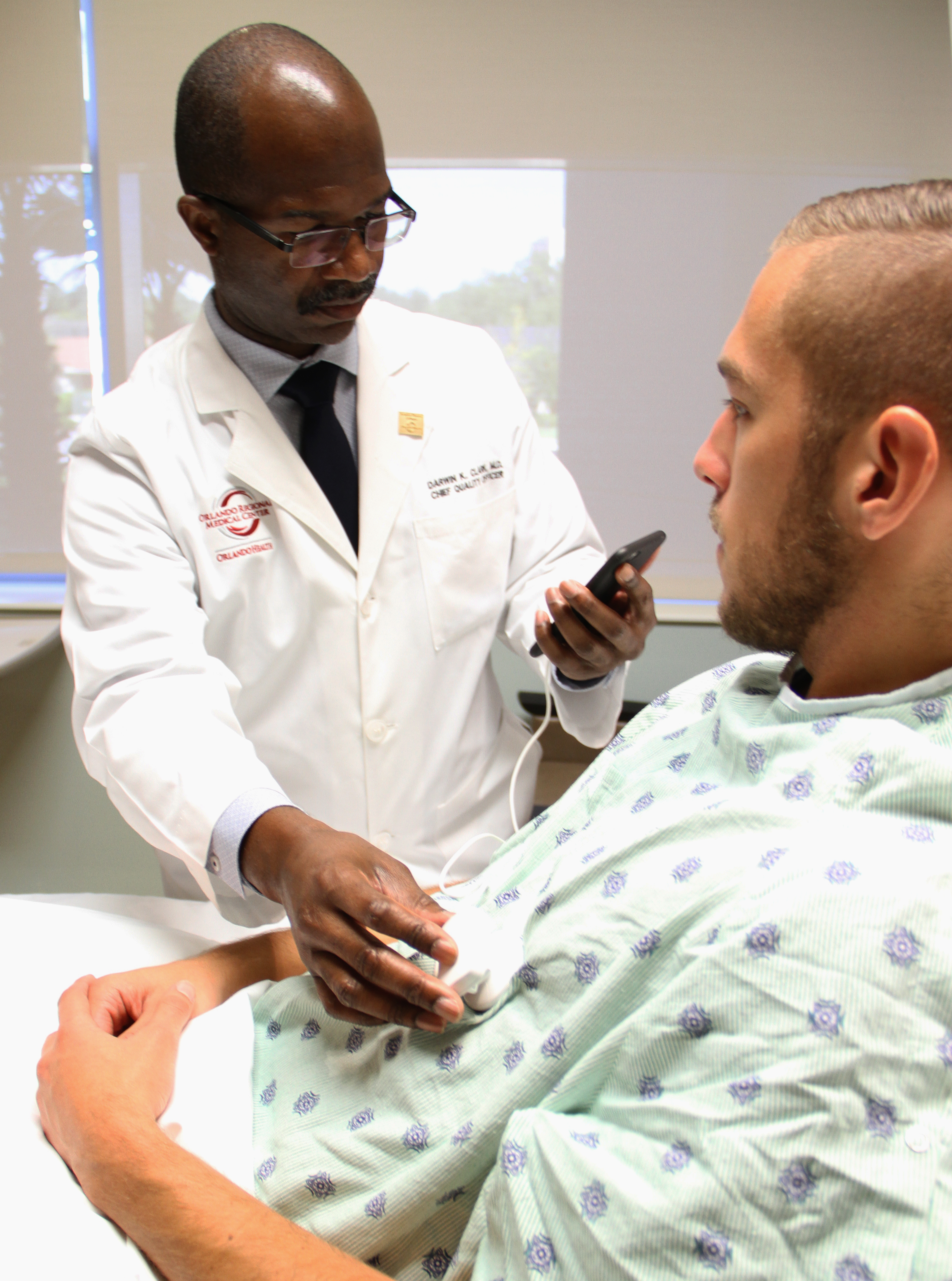 Traditional stethoscopes allow only healthcare providers to hear heartbeats and other sounds inside a patient`s body, but with HeartBuds, patients and doctors can hear, see, and record those sounds by connecting the device to a smartphone.