Orlando, Fla –  Maria Lehan had just finished a check up with her doctor recently, when he suggested something unusual. He told Maria he would like to see her again in a month and, if it was okay, there would be at least a half dozen other patients there, too.

“I didn’t know what to think,” said Lehan, a 73-year old with diabetes who lives in Orlando, Florida.  “I’d never gone to the doctor with a group of people before, so I went and just listened the first time,” she said, “but every time I went back it got better.”

A year later, Lehan is still going. It’s a growing trend in medicine known as “shared medical appointments,” where groups of patients come together to meet with teams of experts and, for Lehan’s group at least, the results are surprising.

“The changes we are seeing in these patients are pretty substantial,” said Ben Kaplan, MD,the physician at Orlando Health who created the patient group of which Lehan is a part. “We’ve improved so many things that it’s really just been a positive journey throughout,” he said.

The appointments last 90 minutes each and while they mostly consist of patients who share the same medical conditions, they feature a variety of experts who can help them. “We’ll have everyone from physiologists who do exercise training to pharmacists who help us go over medications,” said Kaplan. “We also bring in dietitians who can help patients make better choices when it comes to food,” he said.

Lauren Popeck, RD of Orlando Health, is one of those dietitians. “Normally, our time with patients is so limited that we simply can’t cover all the information we want to share,” said Popeck. “In the group meetings I can cover a lot of different topics and I always do some kind of cooking demonstration so they see how easy it really can be to eat healthy,” she said. “I think it’s helped them a lot.”

It has, in fact, according to the patients’ medical records. There are 18 patients in Kaplan’s group, all of whom have been diagnosed with diabetes. After a year of group meetings, their numbers are impressive. On average, each patient lost 14.3 pounds, their cholesterol dropped a staggering 45.6 points, on average. Their A1C tests, which measures their level of blood sugar, dropped an average of two percent and their blood pressure went down significantly, an average of 16/13 mmHg per person.

“It’s that group mentality that really had a positive effect on them,” said Kaplan. “They saw that if their friends were coming and doing well, it motivated them to do the same. As the sessions continued month to month, the investments they were making in their own health began to increase and they kept getting healthier,” he said.

Shared appointments at Orlando Health cost the same as any other regular doctor’s visit, and studies from a number of other institutions show they help. Researchers analyzed patients from nearly a thousand shared medical appointments nationwide, and in a study published last summer in the Annals of Family Medicine, patients who attended shared appointments were more likely to rate their visits as “very good” compared to those who only had traditional appointments. Those who participated in group visits also rated their doctors as more accessible and said their caregivers were more sensitive to their needs compared to other patients.

The group meetings don’t replace personal doctor’s visits, of course. Physicians still meet one-on-one with their patients, but it’s in these shared medical visits, Kaplan says, where many seem to thrive.

“Ninety minutes with your physician is unheard of in our day and age. Usually patients get rushed in and out for a ten minute visit,” he said. “So, the fact that they can spend so much time with me and with so many other experts is one of the things patients really like.”

That includes Maria Lehan. “People might think that when you go to a doctor’s visit with a group of people that you might get less attention, but I’ve found that I actually have more access to my doctor,” she said. “I love it. I think all doctors and hospitals should be doing it,” she said.

About Orlando Health: Orlando Health is a $1.9 billion not-for-profit health care organization and a community-based network of physician practices, hospitals and care centers throughout Central Florida.

Orlando Health is one of Central Florida’s largest employers with more than 15,000 employees and nearly 3,000 physicians supporting our philosophy of providing high quality care and service that revolves around patients’ needs. We prove this everyday with over 100,000 inpatient admissions and nearly 900,000 outpatient visits each year. In all, Orlando Health serves 1.8 million Central Florida residents and more than 4,500 international patients annually. Additionally, Orlando Health provides more than $270 million in support of community health needs. More information can be found at www.orlandohealth.com. 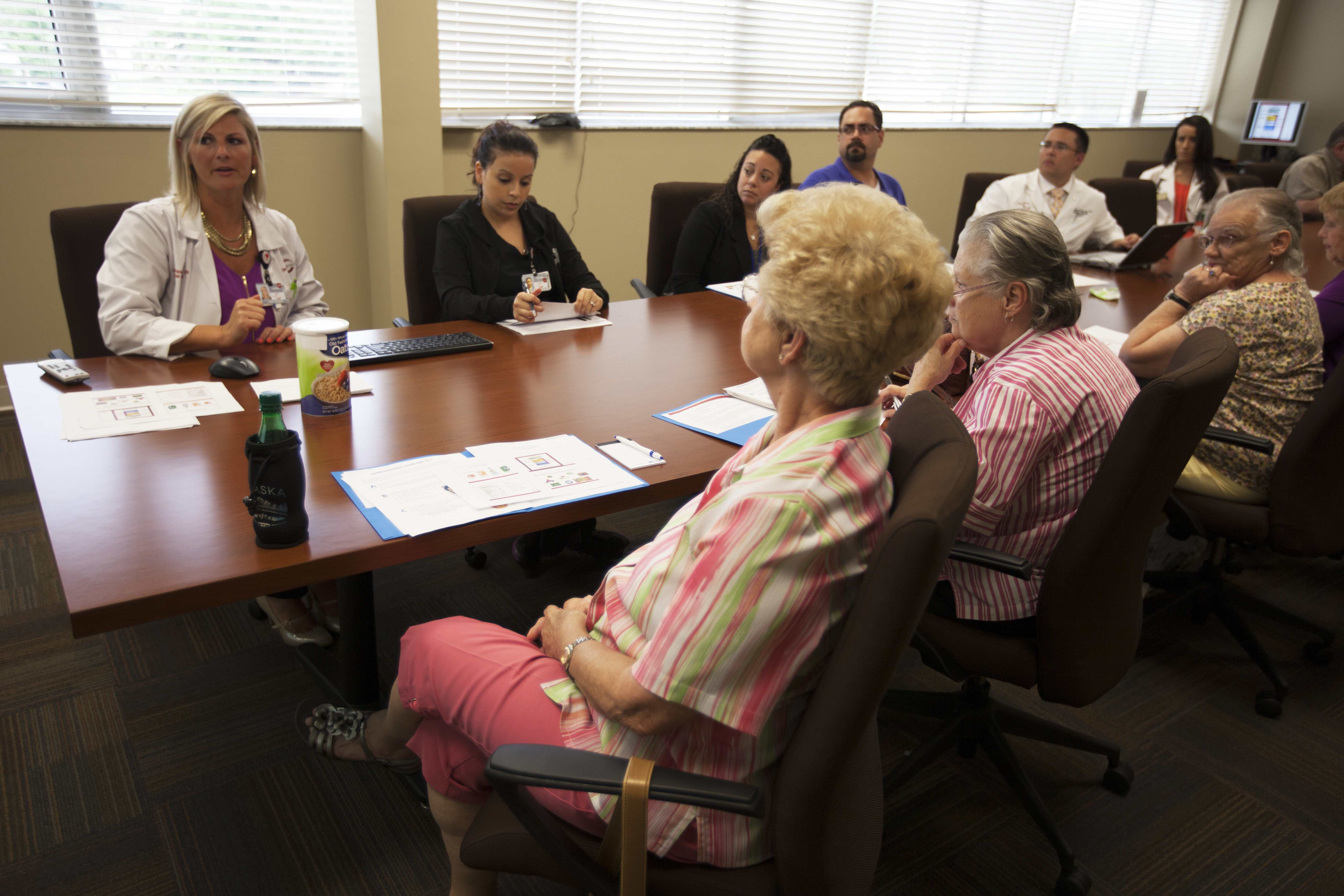 A group of patients and healthcare providers meet for a shared medical appointment at Orlando Health. After meeting as a group for a year, the patients, who all have diabetes, showed significant improvements in their weight, blood pressure and cholesterol levels. Learn more about this growing trend here: bit.ly/1HmaXDx 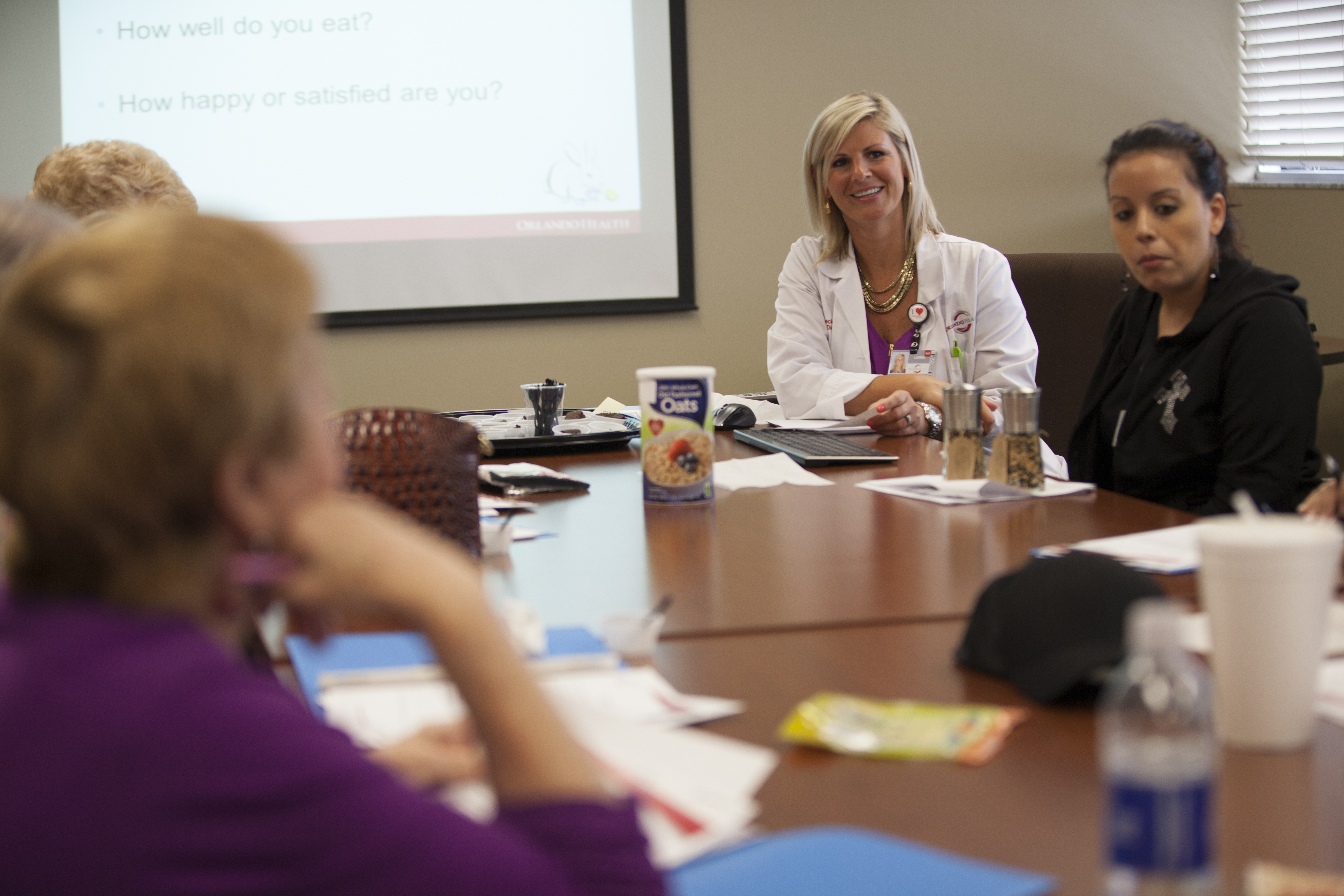 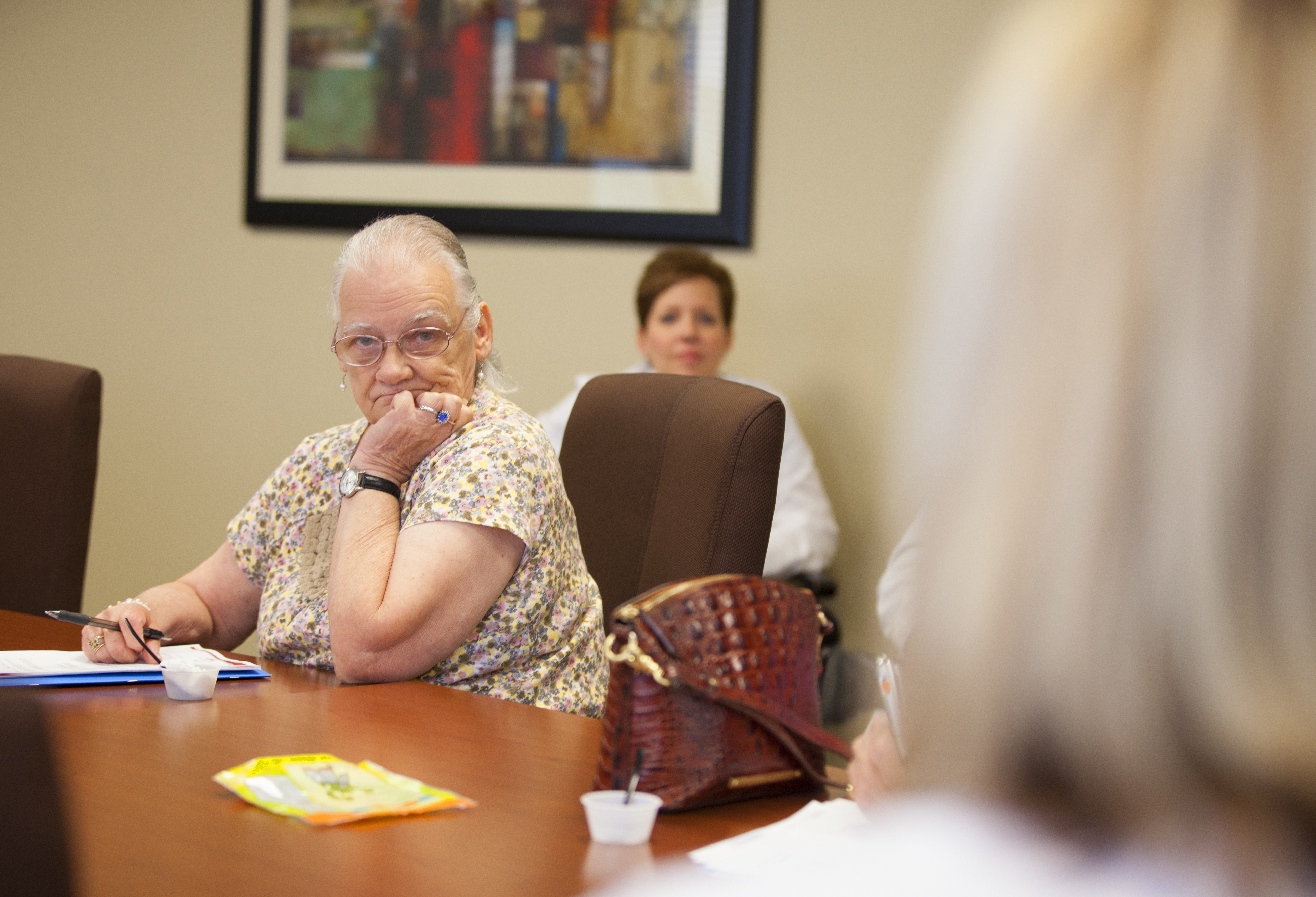 Maria Lehan takes part in a shared medical appointment at Orlando Health. Lehan was part of a group of 18 patients who attended doctors` appointments together and showed significant improvements in their weight, blood pressure and cholesterol levels. Details: bit.ly/1HmaXDx 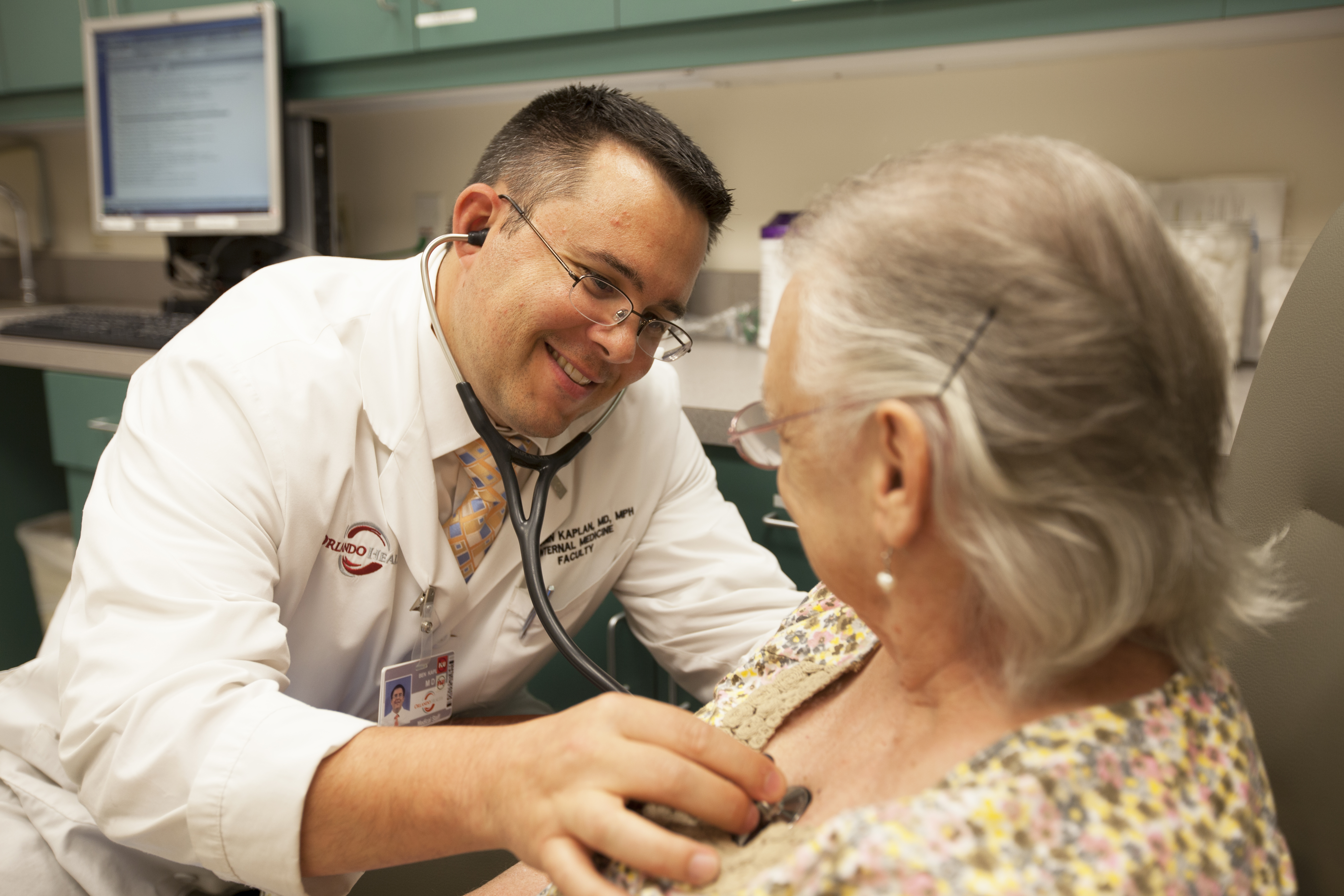 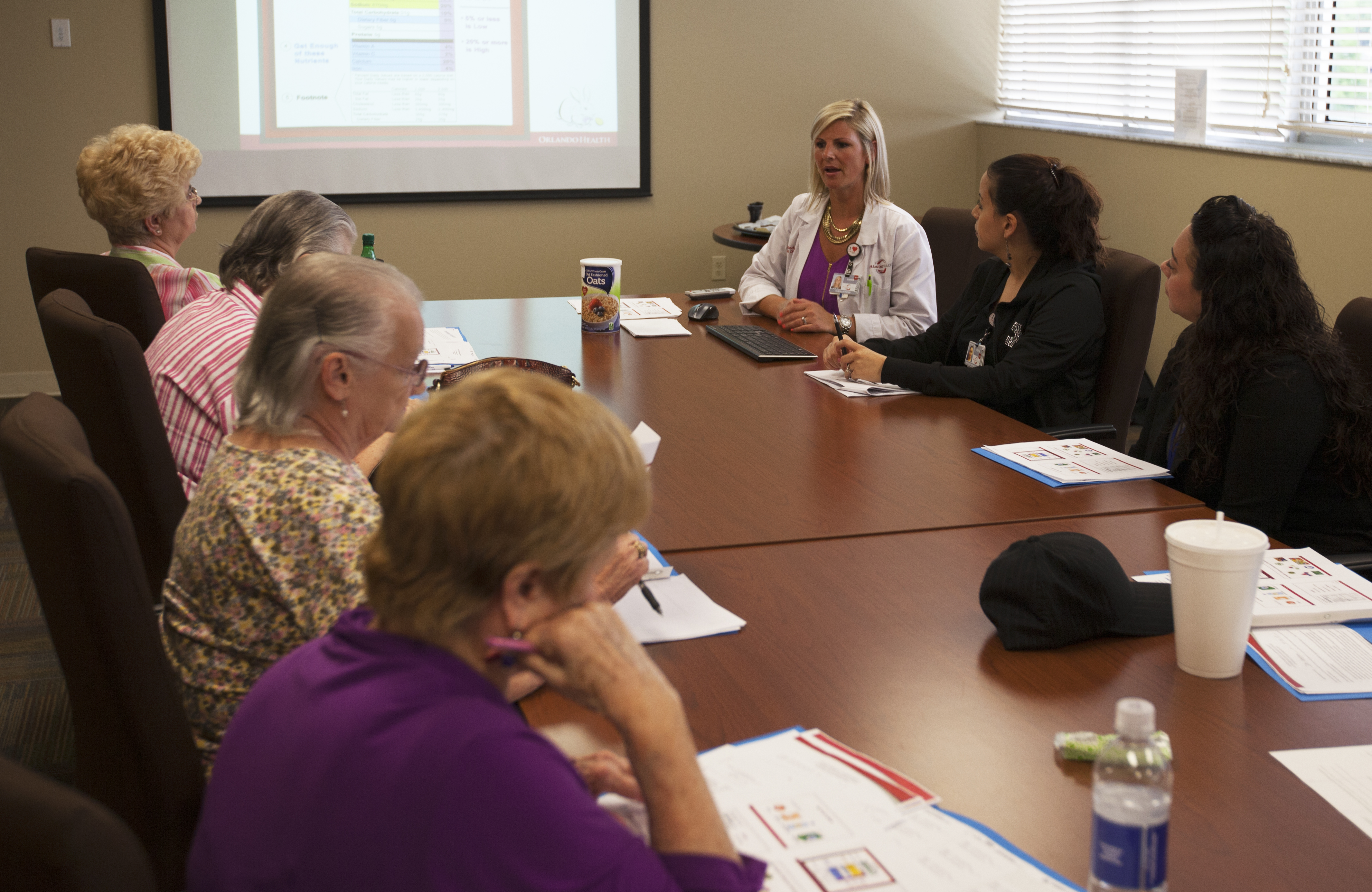 Experts say the trend of sharing medical appointments is not only catching on, it`s having a profound impact on patients. Once a month, these patients meet with a team of healthcare experts at Orlando Health. After tracking their progress for a year, doctors found they lost an average of 14.3 pounds per person, their blood pressure improved and their cholesterol level dropped by more than 45 points Details: bit.ly/1HmaXDx 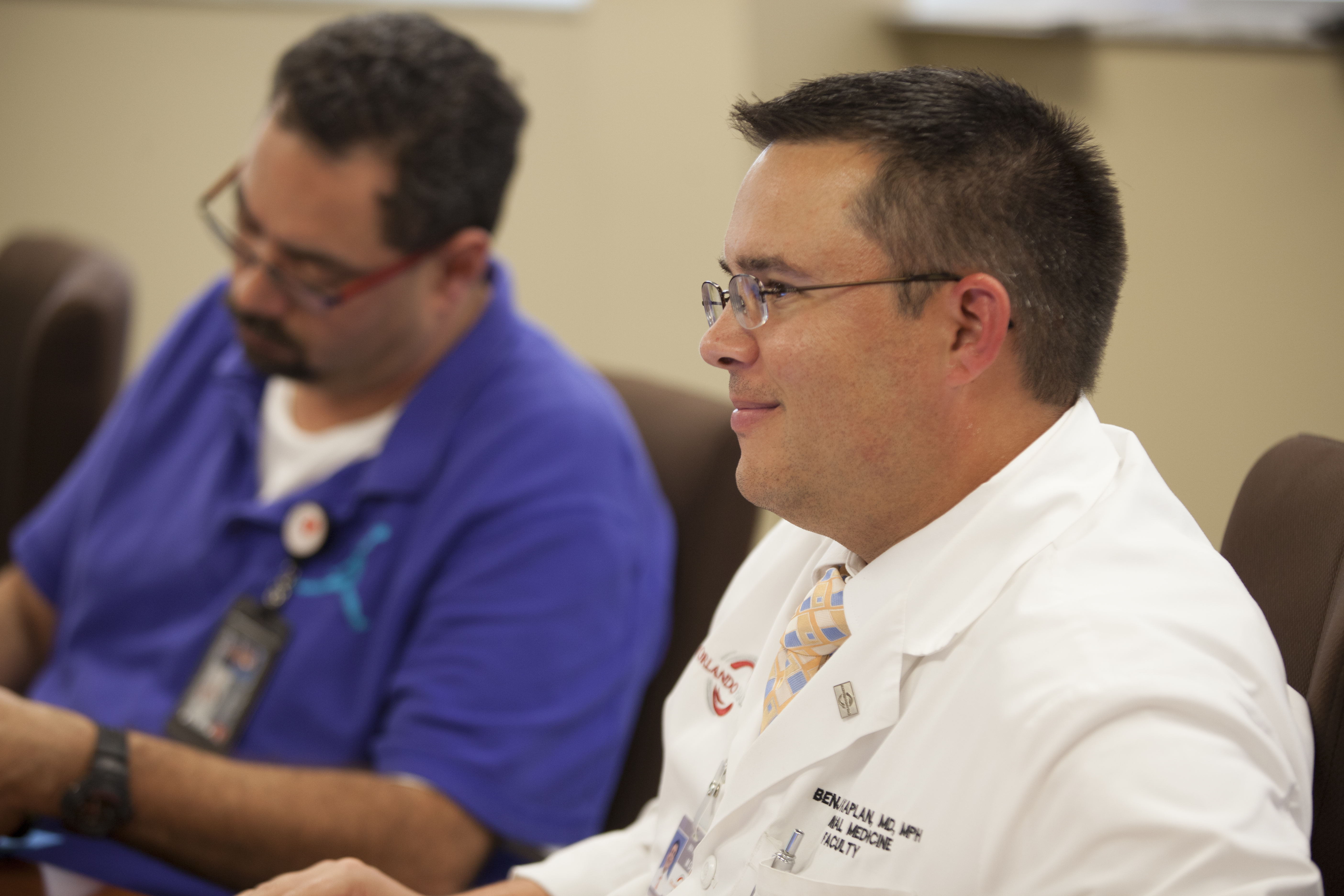 Ben Kaplan, MD, takes part in a shared medical appointment with several of his patients at Orlando Health. Kaplan got 18 of his patients who have diabetes to meet together with him and other experts as a group once a month. A year later, patients shows significant improvement in their health. See how the group meetings help and what one patient has to say about them here: bit.ly/1HmaXDx 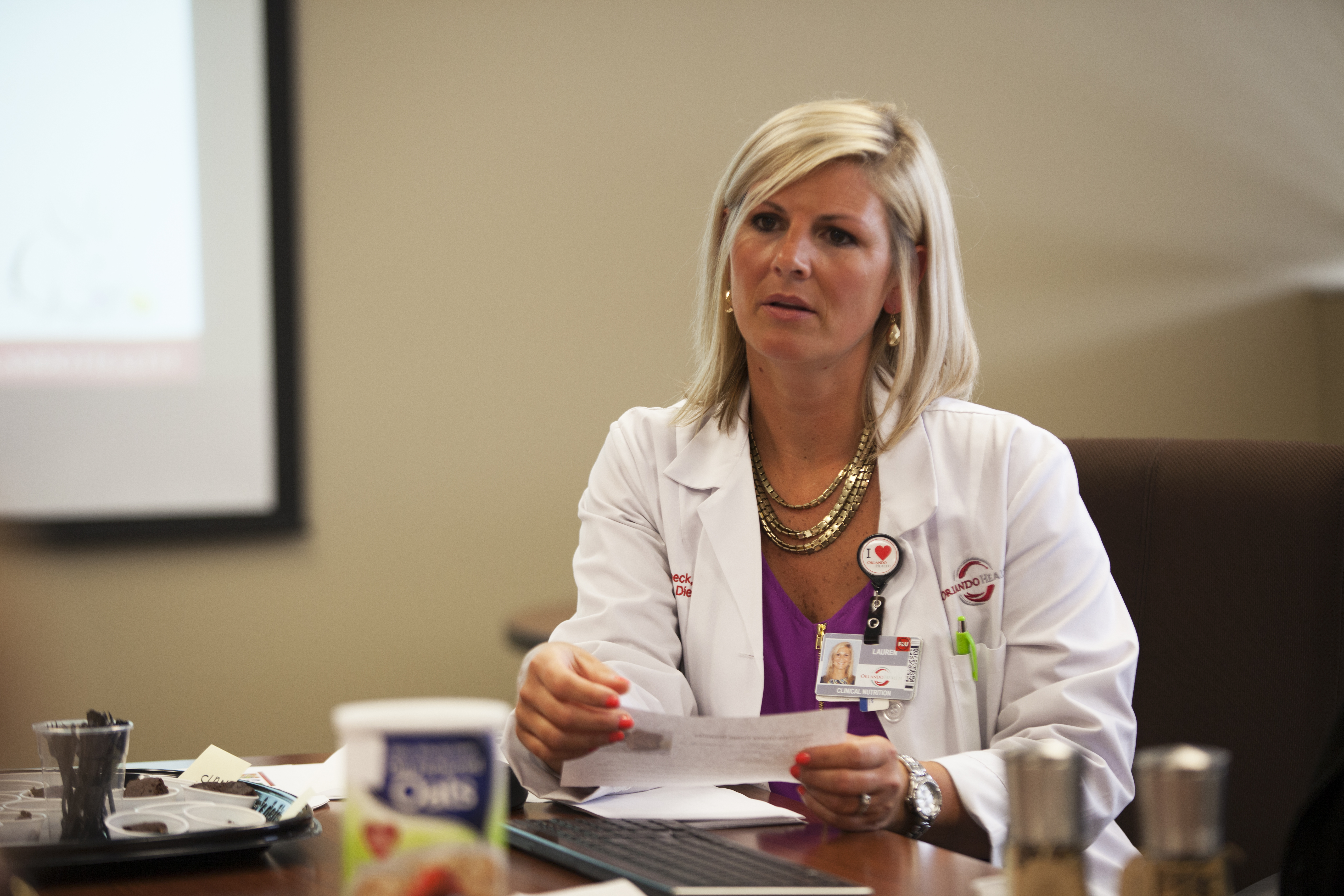 Registered dietitian Lauren Popeck gives nutritional advice to a group of patients during a shared medical appointment at Orlando Health. The appointments allow for several patients to meet with a team of experts, including physicians, dietitians and pharmacists, in one 90-minute session. See the remarkable impact the approach is having on one group of pateints by clicking here: bit.ly/1HmaXDx